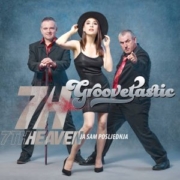 The band’s press release reads… Davor has been professionally working in the music industry for more than 35 years. Currently, he specializes in various commercials and TV adverts for many Croatian & international clients. But his first love was the funk & disco sound (he made numerous remixes in disco house style under artistic name D3), so this is natural step further. Anđelko has been working in a record company for more than 20 years, and his reaction to the idea was very fast and inspiring. The only thing missing was Sabina Špoljar, brand new female name & face on the scene, so chemistry was very important. ‘Ja Sam Posljednja’ (I Am The Last One) is also a track that was used for the audition, so it is very emotional to see that everything was worth it and functional. Single is available from September 19th.

For a first single, Groovetastic asked for support by international remix power producers 7th Heaven. Response was quick and honest, remix was created in their inspired manner.

The remix is set for release on October 10th, over all usual digital stores.