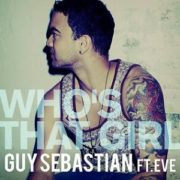 7th Heaven have remixed the awesome new single from Aussie superstar Guy Sebastian ft. Eve. The song is entitled ‘Who’s That Girl’ and is taken from his new compilation ‘Twenty Ten’, a hot seller currently in Australia. This remix is due for release imminently down under on Sony and hopefully other territories later in the year. Guy is a household name in Australia being the first winner of their version of ‘Pop Idol’ in 2003. It’s a really quite fabulous song and very contemporary. 7th Heaven’s mix is typically joyous.