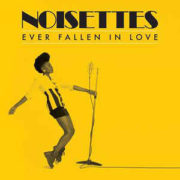 7th Heaven have remixed the amazing new Noisettes single ‘Ever Fallen In Love’ for Vertigo/Mercury. It is a cover of the classic 70’s Buzzcocks song released to celebrate the 50th anniversary of Dr. Martens boots! Noisettes, REM, and Radiohead have all covered ten cult classics which will be presented in a series of specially produced videos and advertisements. The track is due for release on 21st June.