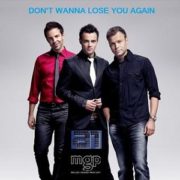 7th Heaven have remixed the amazing new single from boyband A1 for Universal in Norway. The song is entitled ‘Don’t Wanna Lose You Again’ which in February came second in Norway’s 2010 Melodi Grand Prix Final, is a superb and extremely catch pop song. There are no definite plans as yet as to when this mix might be released.