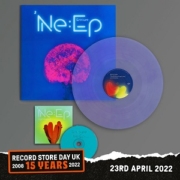 We’ve known since we delivered the remix that this was the plan for it, so we’re thrilled to have it released at last, on such a fabulous package.

Erasure’s press release reads: We are pleased to announce that for Record Store Day 2022 Erasure will be releasing a vinyl edition of last year’s five-track ‘Ne:Ep’ release which comes bundled with an eight-track CD featuring the five tracks from last years digital EP ‘Ne:Ep Remixed’ supplemented by three previously unreleased bonus remixes.Record Store Day 2022 will take place on Saturday, April 23rd 2022 and Erasure’s ‘Ne:Ep’ bundle will be available as part of the Record Store Day initiatives in the UK, North America and elsewhere (check your local RSD website for details), and will be available online from participating retailers from April 30th.