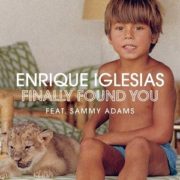 Currently on promo here in the UK and the US is the 7th Heaven remix of the super-catchy and brilliant new Enrique Iglesias single featuring Sammy Adams ‘Finally Found You’. The song is the lead single released from Spanish-bilingual recording artist’s tenth studio yet to be titled album. He has always been high on 7th Heaven’s ‘must remix’ list since they remixed his first hit ‘Hero’ as Dataluxe during their days working at Almighty. ‘Finally Found You’ is set for release on Polydor on 2nd December 2012.