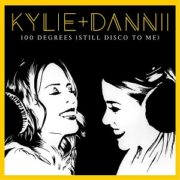 The producers behind the Kylie Minogue ft. Dannii Minogue song ‘100 Degrees’ had an idea to re-release the track with a lyric revision to freshen the song for a spring release. So gone are are the Christmas references and instead the girls sing ‘It’s still disco to me’. 7th Heaven were asked to tweak their remix for this new release. ‘100 Degrees (Still Disco To Me)’ is available to purchase now from most digital stores.