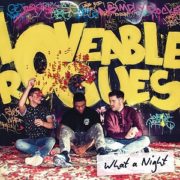 You may remember English boyband, Loveable Rogues, from last year’s ‘Britain’s Got Talent’. Consisting of members Eddie Brett, Sonny Jay Muharrem and Te Qhairo Eugene, the lads are tipped to be big in 2013. 7th Heaven have remixed their debut single ‘What A Night’ for Syco. It is set for release on 21st April 2013.