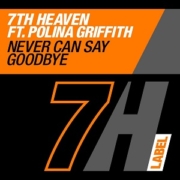 One of the first 7th Heaven remixes completed back in 2006 was for A-Studio ft. Polina’s epic house anthem ‘S.O.S’, a tune I loved, so it’s fantastic to be working on this great new version of the soul/disco classic, with Polina’s amazing vocal. This girl has the most fantastic voice.

‘Never Can Say Goodbye’ was originally intended by Motown for The Supremes but was in fact first recorded, in 1971, by The Jackson 5. It has been covered numerous times since, most notably in 1974 by disco diva Gloria Gaynor and in 1987 by British pop group The Communards. Our version is a homage to those two timeless disco versions.

We’ve yet to firm up the release date but mid-October is the plan, on 7th Heaven’s own 7H Label.

Also, keeping you up-to-date with future plans, the long discussed 7th Heaven album of productions is set for late 2022. The delay is due to us waiting for licenses of a couple of tracks to revert back to us, plus we’re intending to record at least 2 new tracks especially (and exclusively) for this album.