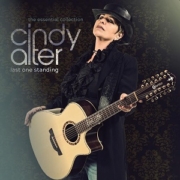 We’re thrilled to announce that 7th Heaven has remixed Cindy Alter’s gorgeous, self-penned track ‘Last One Standing’. Cindy Alter, best known as the voice of internationally acclaimed 70s pop band Clout, is releasing a new single ‘Last One Standing’ as part of a definitive collection of her most well-known songs from her career spanning over 40 years. The album, titled ‘Essential Collection – Last One Standing’, features 15 songs that cover her journey not only in Clout, but in Afro-pop band Zia, country duo Alter Irving and her time as one of South Africa’s most acclaimed singer songwriters. To date, Cindy has sold in excess of 12 million units, thus placing her as one of the country’s biggest selling artists of all time.Jon and myself had both been fans, as kids, of Clout’s UK #2 chart hit ‘Substitute’ so to get to work with this lovely lady was a delight. Plans are afoot for 7th Heaven to produce an all-new version of ‘Substitute’ (originally recorded by The Righteous Brothers) so we’re super-excited about that. I think many, old enough to remember it, will be too. Summer 1978, Clout’s version was heard everywhere. But before then, the focus is on Cindy’s epic track ‘Last One Standing’ and this stellar compilation, which I shall be urging you all to download. Release information to follow.