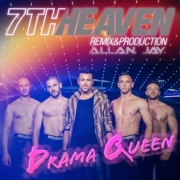 As June is the month for many international pride events we’re pleased to announce that 7th Heaven has remixed Allan Jay’s uplifting new gay anthem entitled ‘Drama Queen’. It is due for release the first week of July through German dance label DMN Records. The track, a cover of the 2007 Danish Eurovision entry, has been recorded and remixed to feature in the upcoming documentary ‘Maisie – Britain’s Oldest Drag Artist’. The documentary is a look at drag legend, David Raven, aka Maisie Trollette, who has been performing as a drag artist for over 50 years. The accompanying video for ‘Drama Queen’ (a still of which is used on the pack shot design shown below) is fun, sexy and camp. It will be go live on YouTube on Saturday, 10th July.