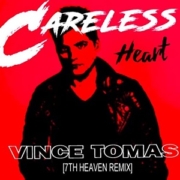 Released today on Dauman Music the awesome new single from American singer/songwriter Vince Tomas, a gorgeous and uplifting dance cover of Roy Orbison’s ‘Careless Heart’. Written by Orbison, Diane Warren and Albert Hammond the song appeared on the star’s final album ‘Mystery Girl’, released after his death in 1989. The song was actually new to me but I’m obsessed with Vince’s version and his vocal is great. The 7th Heaven remix is a big anthem of a mix. It’s available to stream/download now from iTunes and Amazon.