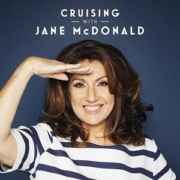 On Sunday, 13th May, Jane McDonald was the proud recipient of a BAFTA award for her hugely successful Channel 5 TV show ‘Cruising With Jane McDonald’. It was a big surprise and great thrill for 7th Heaven’s Jon Dixon who is Musical Producer for the award-winning show. Huge congrats to Jane, Channel 5, Elephant House Productions, Jon Dixon and the team of skilled musicians. Jon is currently working on songs for the next series.

22nd June, sees the release of a fabulous new Jane McDonald CD of songs featured in the first series of ‘Cruising With Jane McDonald’. Produced by Jon Dixon it features Jane’s interpretations of popular songs including ‘Club Tropicana’, ‘Caledonia’, ‘Vienna’, ‘Let It Go’, ‘The Winner Takes It All’, ‘Cuba’, ‘Mambo Italiano’, ‘Lost In France’, ‘It’s Oh So Quiet’, ‘Something Inside So Strong’, ‘California Dreamin’, ‘Proud Mary’, ‘Step Back In Time’.

JON DIXON IS BACK WITH ‘JANE & FRIENDS’
Scroll to top